Staying Well is a Calderdale-based project providing a universal adult service for all vulnerabilities. It is a social-prescribing type service: seeking to support local people and local community organisations and to connect them together with the aim of improving the overall health and wellbeing of those who are supported and increasing the community capacity of the area.

The pilot phase started in early 2015 with around £1m Clinical Commissioning Group non-recurrent funding. This included funds for micro-commissioning (see 8 & 9 below) of £200,000. These funds ran until summer 2016 and since then the project has been cross-funded through various streams from the Local Authority: including Public Health & Community Services funds. There is no longer core Health funding for this service from any source. We are expecting contract extensions with the Local Authority through to March 2021 in due course.

The purpose of the project

The initial business case for the pilot (early 2014) described the project as a Calderdale response to numerous research findings demonstrating the impact of loneliness on the general health and well-being of older and more vulnerable people. The business case when on to describe a desire to develop an innovative and collaborative approach building on existing local voluntary sector and neighbourhood infrastructure in Calderdale and a range of best practice elsewhere, particularly the nationally recognised Bolton Staying Well project. It set out 3 main aims:

In October 2016 the project became a Calderdale-wide programme and expanded to cover all ages and vulnerabilities (not just loneliness and social isolation). At the same time the Local Authority’s Neighbourhood Schemes team (which had previously had similar “community development” functions) amalgamated with and rebranded as Staying Well and all staff were seconded to the hub lead organisations (HBCA, Halifax Opportunities Trust and North Halifax Partnership).

The setting and context

Staying Well started as a pilot project focused on 4 areas within Calderdale MBC: North Halifax, West Central Halifax, Elland and Hebden Bridge. Hebden Bridge Community Association (HBCA) was invited to take part in the pilot along with 2 other “community anchor” organisations: Halifax Opportunities Trust and North Halifax Partnership. The project moved to a pan-Calderdale project in October 2016. HBCA has responsibility for the project across 4 Council wards across the upper Calder Valley.

The Association owns and runs Hebden Bridge Town Hall where we offer a range of spaces for community activities, meetings and celebrations; 35 business units and a hot-desking facility; an affordable café; and we host a wide range of special events, festivals and exhibitions. We are a charity and company established in 2008 in order to take on the asset transfer of the former Council Offices in Hebden Bridge which we have extended into the new Town Hall opened in summer 2012.

The approach used in the project

The project aimed to gather local evidence of the impact of community-based interventions on individuals positively impacting on their overall health and well-being and reducing health inequalities with the expectation that there would be an impact on demand and rates of admissions for planned, unplanned and long term care. There was also an aspiration originally that this would establish the cost-benefit of social prescribing across Calderdale.

“The programme focussed on early interventions for adults and sought to realise long term effectiveness and efficiency by focussing on preventative activities in line with the systems strategic direction” (quoting the early 2014 business case).

The micro-commissioning funds aimed to distribute funds at the local level to support the development of new initiatives. We have 3 local examples in Hebden Bridge of projects funded in the pilot phase which have continued long after the pilot funding ended along with small capital improvements and support to partners who have thrived as a result. We can expand further on these if necessary.

There is more demographic information available on participants within the database: I haven’t got access to this but we can obtain it if helpful.

Beyond the client numbers it gets harder to evidence numbers and detailed data.

One of things we have found hard to monitor without embarking on resource intensive research is gathering information on the “cascade” effect: Staying Well support individual clients and refer them into activities; we also support the organisations who deliver the activities; the question of how many other people do these organisations support (indirectly benefitting from Staying Well) and how many other people are engaged by these strong community organisations as a result of the support we provide is unknown. How do the ripples work?

The project impact and outcomes

As described elsewhere the success of the first phase led to the expansion from the 4 pilot areas focused on older people to the whole Borough and all ages. The project has continued to be supported by the Local Authority with a long-term 3 year commitment made for 2018-2021.

The project is now measured against various outcomes:

We can supply further data from this if necessary: it’s held in the central database.
Staying Well has been successful in aligning with new initiatives across the District whose aims and goals are linked or aligned, for example: a post Boxing Day Floods initiative arising from the local Community Foundation generated an opportunity to manage another micro-commissioning pot of funding of £30,000; Staying Well across Calderdale has co-ordinated another Community Foundation initiative around Tackling Isolation leading to both new community-based networks and also small amounts of ward-based micro-commissioning funds; Calderdale is one of a small number of Sport England pilots on increasing activity levels – several aspects of this Active Calderdale programme have been based on Staying Well and 2 of the 3 hub organisations have secured new funding to employ a local community development role which aligns to Staying Well. The Staying Well programme is well placed to take advantage of other possibilities which arise in the future.

We cover elsewhere 2 evaluations which have been conducted and each hub organisation has at different times produced their own reporting on the project.

Enablers and barriers that affected the project outcomes

The biggest and most disappointing barrier has been around the engagement with health beyond the initial pilot phase which was CCG funded. We have consistently found it hard to persuade GPs to refer directly even though there are simple referral routes: aside from a few individual GPs who have been very enthusiastic. The most recent evidence of this is that the developing Primary Care Networks locally have chosen to employ new social prescribers via the local GP Alliance body rather than engaging with Staying Well and amalgamating the projects: risking duplication and public confusion.

Other barriers we see are:

In terms of enablers the architecture of the project has ensured continued success. The importance of having a consistent brand, single point of access and basic working systems across the whole project means you get the benefits of consistency and brand. This has however been matched by the benefits of using different local hub organisations who can enable the project to look and feel appropriate to the local environment. So for example in areas with lower levels of social capital Staying Well has been more active in developing and delivering services “in house” whereas in areas like the Upper Valley this is not necessary and the effort has been in connecting organisations together more effectively through networks of like-minded organisations focussed on the broad health and wellbeing field in order to avoid duplication.

I would note two things:

Next steps and sustainability

There seems to still be an appetite within the Local Authority to continue supporting the Staying Well programme financially. Contractually the service ended on 30th September 2019 but there is verbal commitment through to 31st March 2021 and we anticipate the contract will follow.

The long-term sustainability would seem to be tied into the future relationship between Staying Well and the core NHS England funding for Social Prescribing Link Workers being channelled through the Primary Care Networks. The longer these two projects are not closely aligned seems to me to increase the risk of damage to the Staying Well project across the District.

How was the information collected for this case study

There have been 2 formal evaluations of Staying Well across the District:
The end of the first phase was marked by a major evaluation of the project by the University of Lincoln (published July 2016)

A more recent study has been completed by the University of Sheffield this year. This is currently going through final revisions so is not yet published.
This case study has been collated from our own data and internal reporting along with centrally produced data from the project. We have also referenced the original business case for the project. 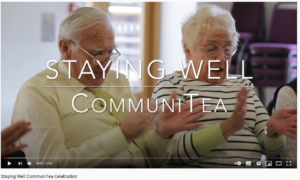 Staying Well has its own website,  along with associated social media: Facebook & Twitter.
Locally in the upper Calder Valley we made a short film made specifically for our celebration event featuring local people who had benefitted from the project to that point